Cobalt Poisoning: A Comprehensive Review of the Literature

Copyright: © 2016 Sheikh I. This is an open-access article distributed under the terms of the Creative Commons Attribution License,which permits unrestricted use,distribution,and reproduction in any medium,provided the original author and source are credited.

Cobalt is a chemical element that has been used for centuries recreationally as pigments for colouring, giving the bluish hue to glass. Cobalt Poisoning can be manifested by a wide array of systemic effects. Cobalt poisoning can be seen as a result of super alloys in orthopaedic implants, ionizing radiation, occupational exposure and rarely as a foam stabilizer in beer. Here in we conduct a review of the literature describing the systemic adverse effects of cobalt poisoning along with the respective toxicity levels that have been attributed to multisystem pathology.

Cobalt is a heavy metal found on the periodic table as atomic number 27 with an atomic weight of 58.933. The element was discovered by Georg Brandt,a Swedish chemist and mineralogist in 1735 [1,2]. Cobalt compounds have been used for centuries to impart a rich blue colour to glass and ceramics. Cobalt has been detected in Egyptian sculpture and Persian jewellery from the third millennium BC,in the ruins of Pompeii (destroyed in 79 AD),and in China dating from the Tang dynasty (618-907 AD) and the Ming dynasty (1368-1644 AD) [3]. Cobalt became the first metal to be discovered since the pre-historical period,during which all the known metals (iron,copper,silver,gold,zinc,mercury,tin,lead and bismuth) had no recorded discoverers [4]. After World War II,the US wanted to be sure it was never short of the ore needed for military cobalt uses (as the Germans had been during that war) and explored for cobalt within the US border. A good supply of the ore needed was found in Idaho near Blackbird canyon in the side of a mountain. The firm Calera Mining Company got production started at the site [5]. Cobalt is known to cause a bluish hue in glass. Brandt attempted to prove the bluish coloration of glass was due to an unknown metal other than bismuth as what was originally postulated during that time. Cobalt is naturally found in many rocks,plants,soil,water,and animals typically in small amounts. In the environment cobalt is found in combination with other elements such as oxygen,sulphur,and arsenic.

Biochemistry,Structure and Uses for Cobalt

The structure of cobalt is hexagonal close-packed but transitions to face-centered cubic at temperatures of 450°C (842°F). However,the difference between the two structures is so small that in practice random intergrowth between the two is common [6-8] (Figure 1). 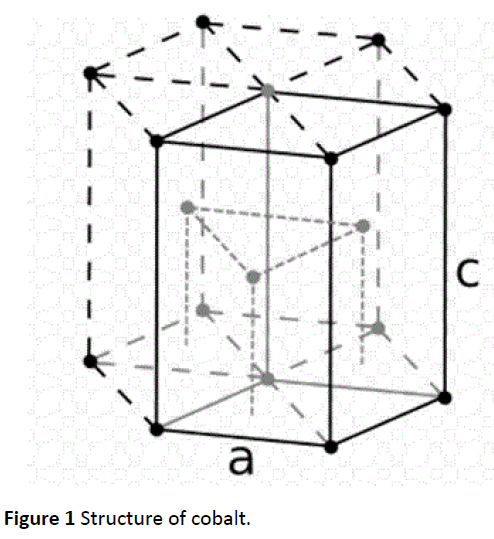 Cobalt is also very important biochemically for homeostasis of DNA,heme,amino acids and fatty acids as cyanocobalamin or Vitamin B12. Vitamin B12 is a cofactor for homocysteine methyltransferase and methylmalonyl-CoA mutase. Homocysteine methyltransferase is important for converting Homocysteine into methionine. The methyl group within methionine becomes activated by the dephosphorylation of ATP forming S-adenosylmethionine (SAM). SAM is an important methyl donor in polyamine synthesis and transmethylation reactions. Methylation reactions are pertinent for myelin maintenance and transmethylation reactions. Thus,a decrease in cyanocobalamin body stores results in decrease methionine and eventually a decrease in SAM.

Although less understood,it is currently believed that reduced levels of SAM (S-adenosylmethionine) and elevated levels of MMA (methylmalonic acid) may contribute to catastrophic neurological disease. These symptoms may present itself as peripheral neuropathy,subacute combined degeneration of the spinal cord,ataxia and even dementia. Dementia is often irreversible if discovered late in the course of the disease. Decrease in cyanocobalamin levels also result in increase in plasma homocysteine levels. Clinically hyperhomocysteinemia can lead to an increase risk of developing thrombosis and atherosclerosis leading to myocardial infarction or stroke like syndromes.

Today,cobalt is used for medical,scientific and recreational purposes. Medically it is used as alloys and superalloys in orthopedic implants [9]. It is used scientifically for chemical reactions as oxidation catalysts [10]. The three main cobalt catalysts include: Hydro-treating,desulphurisation - cobalt molybdenum oxide - CoMOX for oil and gas; Terephthalic acid (TPA)+dimethylterephthalate (DMT) - cobalt acetate +manganese. TPA and DMT are used to manufacture resin for plastic bottles and also to make the new ultra strong plastics used in recording tapes; and OXO catalysts - freshly reduced cobalt metal,carbonyls or cobalt salts (transformed in situ to carbonyl).

Toxicities: Review of the Medical Literature

Toxicity caused by cobalt is extremely rare. The average concentration of cobalt in ambient air in the USA is approximately 0.4 ng/m3. However,cobalt in air will vary substantially from non-source areas to areas with cobaltrelated industries. Exposure of cobalt from water varies considerably from location to location but median cobalt concentration in USA drinking water is <2.0 μg/L [11]. For example,in Canada,the daily cobalt intake of the average adult form drinking water is ≤ 2.6 μg; this could increase to 10 μg for those living in areas with the highest cobalt levels [12-19] (Table 1).

Occupational exposure to cobalt can result from metal mining,smelting,refining,in industries that make or use cutting or grinding tools,or in other industries that produce or use cobalt metal and cobalt compounds. In these occupations the route of exposure is usually inhalational.

Reported effect levels in occupationally exposed humans have ranged from 0.015-0.13 mg Co/m3. Toxicities of cobalt if inhaled may present with the patient suffering from decreased pulmonary function,increased frequency of cough by irritation of respiratory cilia and possible sensitization of the immune system,respiratory inflammation,and pulmonary fibrosis. The proposed mechanism of inhalational exposure may result from generation of oxidants and free radical damage.

Cobalt toxicity can present with haematological,cardiovascular,immunological,gastrointestinal,endocrinological,dermatological,ophthalmological and neurological effects.

Haematological effects caused by Cobalt are thought to be due to the inhibition of heme synthesis in vivo by acting upon at least two different sites in the biosynthetic pathway. This inhibitory activity might result in the formation of cobalt protoporphyrin rather than heme. Cobalt may also stimulate haeme oxidation in many organs due to the induction of heme oxygenase and is believed to stimulate EPO increase by acting on a heme-containing protein [20].

Cardiovascular effects caused by Cobalt toxicity have been reported in many studies [21-26]. Cobalt Sulfate was used in Quebec,Canada as a foam stabilizer in beer [21-24] with the average intake of 0.04 mg Co/kg/day to 0.14 mg Co/kg/day [25,26] for a period of years. It was known as beer-drinkers cardiomyopathy and appeared similar to the dilated cardiomyopathy caused by Thiamine deficiency (wet beriberi). However,the onset of beer-cobalt cardiomyopathy was more acute in comparison to beriberi. Beer-drinkers cardiomyopathy has been reported to have a very high mortality with 40-50% of patients admitted to the hospital dying within several years of diagnosis and those who survive 23-41% had abnormal EKG’s [25,26]. The mechanism for cobalt cardiomyopathy is poorly understood,however it is thought that the accumulation of cobalt in cardiac tissues stimulates carotidbody chemoreceptors,mimicking the action of hypoxia. The molecular destruction of cardiac muscle as studied in rat models is due to a decrease in cardiac enzymes,including manganese-superoxide dismutase,succinate-cytochrome C oxidase,NADH-cytochrome C reductase,and cytochrome C oxidase,as well as reducing the mitochondrial ATP production rate [27].

The first signs of beer-cobalt cardiomyopathy syndrome were GI effects [24,28] where ingestion of an average of 0.04 mg Co/kg/day for a period of years subsequently followed cardiomyopathy. Hepatic injury from cobalt toxicity may result from ischemia secondary to the cardiac effects of cobalt,and/or from excessive alcohol consumption (Cobalt-Beer Drinkers Cardiomyopathy) [26,28] (Table 2).

While there is only stable isotope of cobalt,59Co,there are many radioactive isotopes of cobalt. Of these radioactive isotopes,two are commercially important,60Co and 57Co. 60Co is produced by irradiating 59Co with thermal neutrons in a nuclear reactor,and is used as a source of gamma rays for sterilizing medical equipment or consumer products,food irradiation,radiation therapy for treating cancer patients and for manufacturing plastics.

For the most part the general population is not exposed to radiate Co,but patients receiving radiation therapy for cancer may be exposed to gamma rays from 60Co source. However,the effect of external exposure to gamma radiation is not unique to 60Co,but is similar for all gamma-emitting radio nucleotides. Other groups of people who are at considerable risk for 60Co toxicity include workers at nuclear facilities and workers at nuclear waste storage sites. Exposure to high doses of cobalt radiation has been shown to result in damage of nervous tissue,particularly peripheral nerves.

Some studies where radiotherapy was applied to nasopharyngeal and cervical LN pathologies,patients developed focal necrosis of the frontal lobe [43]. Another study showed patients also receiving 60Co radiotherapy for ALL (head only) developing severe vision disorders and even total blindness [44]. In this study,subsequent histopathology was done on one of the patients demonstrating severe alterations in the optic nerve,including severe atrophy,terminal beading,lack of myelin,and calcifications. Other effects of 60Co radiotherapy include myelopathy,resulting in minimal to mild paralysis [45] and brachial plexus neuropathy,vocal cord paresis [46].

Cobalt is widely dispersed in the environment in low concentrations. It is found in soil,water and cobalt alloys. Current analytical methods fail to determine the specific chemical form of cobalt present in the environment. Thus it is difficult to always be certain of the chemical form of cobalt to which an individual may be exposed or the form of cobalt in hazardous waste sites. For example,the concentration of cobalt in soil varies from about 1 to 40 ppm (1 ppm=1 part of cobalt in a million parts of soil by weight),with an average level of 7 ppm; the concentration of cobalt in the air is less than 2 ng (1 ng=one billionth part of a gram) per cubic meter (ng/m3); the concentration of cobalt in surface and groundwater in the USA is generally between 1 and 10 ppb (parts of cobalt in 1 billion parts of water); the cobalt level in most drinking water is less than 1-2 ppb [47]. Food is considered the largest source of cobalt intake,where in which the average individual consumes about 11 micrograms of cobalt a day in their diet. Included in these foods is vitamin B12,which is found in meat and dairy products. Occupational exposure to cobalt can also be seen in individuals at risk. Highrisk occupational exposures include those individuals working in metal mining,smelting and refining industries. In general,risk of acquiring cobalt toxicity from the environment is relatively low due to the minuscule amount of cobalt present. However,those with high-risk occupations,as listed above,should practice appropriate industrial hygiene by using exhaust systems in the workplace and wearing protective clothing.

Although cobalt toxicity is a relatively rare occurrence it should still is noted as a complication of total knee and hip replacement surgical procedures especially when a cobalt alloy is used as the replacement graft. Since the advent of proper brewing techniques “beer-drinkers cobalt toxicity” is also a relatively rare occurrence [21-23]. However,when evaluating patient’s cardiomyopathy or interstitial lung disease,especially in patients with past history of knee or hip alloy replacements,one should always consider the possibility of systemic cobalt poisoning and workup should be done. Furthermore,a prospective observational study evaluating the incidence cobalt toxicity in patients with total knee arthroplasty where cobalt was used as the graft should be done. If at most,a cobalt metal laboratory panel should be considered in patients with cobalt alloys to determine the level of exposure and risk of cobalt exposure from such alloys [48].